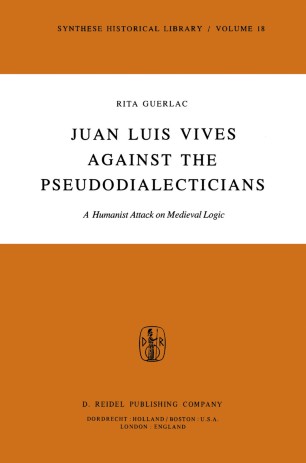 Juan Luis Vives Against the Pseudodialecticians

A Humanist Attack on Medieval Logic

The humanist treatises presented here are only peripheral to the history of logic, but I think historians of logic may read them with interest, if perhaps with irritation. In the early sixteenth century the humanists set about to demolish medieval logic based on syllogistic and disputation, and to replace it in the university curriculum with a 'rhetorical' logic based on the use of topics and persuasion. To a very large extent they succeeded. Although Aris­ totelian logic retained a vigorous life in the schools, it never again attained to the overwhelming primacy it had so long enjoyed in the northern universities. It has been the custom to take the arguments of the humanists at face value, and the word 'scholastic' has continued to have pejorative overtones. This is easy to understand, because until recently our knowledge of the high period of medieval logic has been slight, and the humanists' testimony as to its decadent state in the sixteenth century has, for the most part, been accepted uncritically. Within the past two decades important work on medieval logic has recovered the brilliant achievement of thirteenth and fourteenth century logicians, philosophers, and natural scientists. New studies are constantly appearing, and the logico-semantic system of the terminists has become fruitful territory not only for historians of logic but also for students of modern linguistics and semiotics.