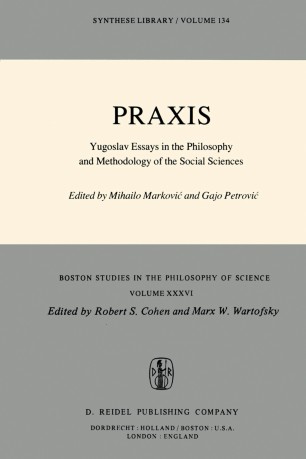 Yugoslav Essays in the Philosophy and Methodology of the Social Sciences

Part of the Boston Studies in the Philosophy of Science book series (BSPS, volume 36)

This volume of the Boston Studies is a distillation of one of the most creative and important movements in contemporary social theory. The articles repre­ sent the work of the so-called 'Praxis' group in Yugoslavia, a heterogeneous movement of philosophers, sociologists, political theorists, historians, and cul­ tural critics, united by a common approach: that of social theory as a critical and scientific enterprise, closely linked to questions of contemporary practical life. As the introductory essay explains, in its history and analysis of the development of this group, the name Praxis focuses on the heart of Marx's social theory - the conception of human beings as creative, productive makers and shapers of their own history. The journal Praxis, which appeared regularly in Yugoslavia at Zagreb, and also in an International Edition for many years, is the source of many of these articles. The journal had to suspend publication in 1975 because of political pressures in Yugoslavia. Eight members of the group were dismissed from their University posts in Belgrade, after a long struggle in which their colleagues stood by them staunchly. Yet the creativity and productivity of the group continues, by those in Belgrade and elsewhere. Its contributions to the social sciences, and to the very conception of social science as critical and applied theory, remain vivid, timely and innovative. The importance of the theoretical work of the Praxis group is perhaps at its height now.