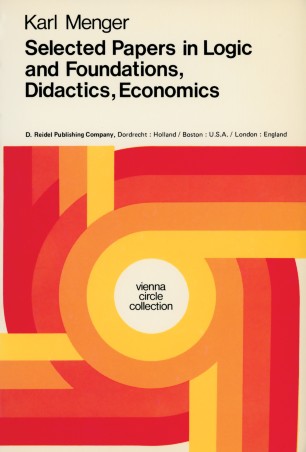 This volume brings together those papers of mine which may be of interest not only to various specialists but also to philosophers. Many of my writings in mathematics were motivated by epistemological considerations; some papers originated in the critique of certain views that at one time dominated the discussions of the Vienna Cirele; others grew out of problems in teaching fundamental ideas of mathematics; sti II others were occasioned by personal relations with economists. Hence a wide range of subjects will be discussed: epistemology, logic, basic concepts of pure and applied mathematics, philosophical ideas resulting from geometric studies, mathematical didactics and, finally, economics. The papers also span a period of more than fifty years. What unifies the various parts of the book is the spirit of searching for the elarification of basic concepts and methods and of articulating hidden ideas and tacit procedures. Part 1 ineludes papers published about 1930 which expound an idea that Carnap, after a short period of opposition in the Cirele, fully adopted ; and, under the name "Princip/e of To/erance", he eloquently formulated it in great generality in his book, Logica/ Syntax of Language (1934), through which it was widely disseminated. "The New Logic" in Chapter 1 furthermore ineludes the first report (I932) to a larger public of Godel's epochal discovery presented among the great logic results of ali time. Chapter 2 is a translation of an often quoted 1930 paper presenting a detailed exposition and critique of intuitionism.