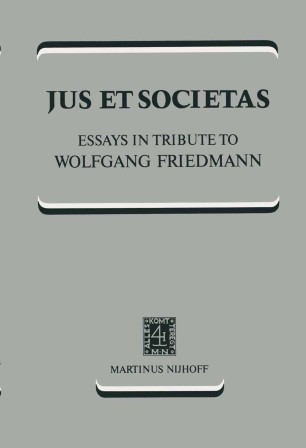 Essays in Tribute to Wolfgang Friedmann

When Wolfgang Friedmann died there was a great outpouring of grief, affection and admiration from his friends all over the world. These deeply felt sentiments were soon channelled into a number of projects to honor him. The initiative towards the preparation of this volume in tribute to Wolfgang Friedmann was taken by his colleague, Hans Smit, of Columbia University, who also arranged for its publication. Judge Philip C. Jessup was the chairman, and Professors John N. Hazard, Louis Henkin, Oliver Lissitzyn, Willis L. M. Reese and Hans Smit of Columbia University Law School, A. A. Fatouros of Indiana University Law School (Bloomington), and Gabriel M. Wilner of the University of Georgia Law School were members of the editorial committee. The authors of the essays are a group of distinguished legal scholars from many countries and who hold widely diverse views. All of them had many ties with Professor Friedmann, including those of friendship and shared interest in problems that were of the greatest concern to him. The number of eminent jurists from countries around the world, and particularly from the United States, who would have wished to participate in this tribute to Wolfgang Friedmann is large; however, several important considerations made it necessary to limit the number of contributions. Thus, for example, the work of several members of the editorial committee is not represented in the volume.