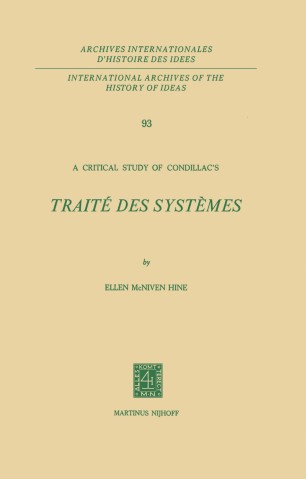 The Traite des systemes is a milestone in the intellectual history of the eighteenth century. This is a study of its content, structure, sources and importance. It includes a discussion of Condillac's analysis of good and bad systems, the adequacy of his knowledge and under­ standing of the speculative metaphysics of the preceding century, the effectiveness of his method of attack on seventeenth-century metaphysical systems, his conception of empirical and scientific method, and in particular his understanding of the role of hypotheses, his application of the Newtonian scientific method to politics, physics, and the arts, and, finally, his preoccupation with the meaning of words and with the origin and purpose oflanguage. Speculative metaphysical systems, such as those of Descartes, Malebranche, Boursier, Leibniz and Spinoza, are attacked by Con­ dillac, as are popular superstitions and prejudices, with the weapon of linguistic criticism. It is the systematic use of this weapon which makes the Traite des systemes more than a reflection of his contem­ poraries' antipathy towards speculative metaphysics. In memory of my MOTHER and FATHER ACKNOWLEDGMENTS I wish to acknowledge my indebtedness to several people. I should like first and foremost to thank Dr. W. H. Barber, who has for many years tirelessly given me encouragement and invaluable assistance. I wish to thank also Professors RH. Rasmussen, A. D. Wilshere and C. Wake for their help and their support in the early days of the preparation of this study. lowe special thanks also to Mrs. M. V.