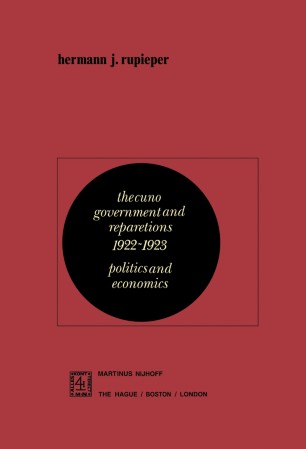 When the First World War ended, the political and economic system of prewar Europe lay in ruins. Though Allied politicians tried at various post­ war conferences to create a new and stable European order they failed because of conflicting and competing national interests. The peace settle­ ments neither established security from renewed attacks by the defeated nations nor did they lay the groundwork for a reconstruction of Europe's devastated economic system, because the members of the Allied war coali­ tion could not agree on the goals to be pursued by the treaties or on the means to enforce their settlement. In this context, reparations played a most signi­ ficant role. The conflict between the European protagonists France, Great Britain and Germany reached its peak at the beginning of 1923 when Franco­ Belgian troops occupied the Ruhr district in a last attempt to implement strategies developed in 1919 for a control ofthe German economic potential until reparations had been paid and to show to the Anglo-Saxon powers that any modification of Allied policy toward Germany could not be attained against French objections or without a simultaneous adjustment of French war debts. By focusing on the reparation issue during the period of the Cuno Cabinet, this book attempts to contribute both to the literature on Cuno and to the interrelationship of political and economic problems after W orId War I.