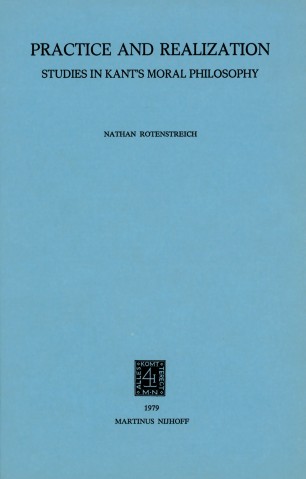 The present book is an exp]oration of some basic issues of Kant's moral phi­ losophy. The point of departure is the concept offreedom and the self-legisla­ tion of reason. Since self-Iegislation is expressed in the sphere of practice or morality, it is meant to overcome some of the vulnerable aspects of Kant's theoretical philosophy, namely that which Kant himself pointed to and called the 'lucky chance,' in so far as the application of reason to sensuous data is concerned. The book attempts to show that Kant's practical or moral philosophy faces questions which are parallel to those he faced in the sphere ofhis theore­ tical philosophy. The problematic situation of realization of practice is parallel to the problematic situation of application of theory. It is in the line of the problems emerging from Kant's practical philosophy that the present book deals with some of Kant's minor writings, or less-known ones, in­ cluding his writings in the sphere of politics, history and education. The limitations of self-Iegislation - this is the theme of the book. The book is parallel to the author's previous one on Kant: 'Experience and its Systema­ tization - Studies in Kant" (Nijhoff, 1965, 2nd edition 1973), as well as to: "From Substance to Subject -Studies in Hegel" (Nijhoff, 1974). Jerusalem 1978 ABBREVIATIONS As to the references to Kant's major works, the following procedme will be ob­ served: Kritik der reinen Vernunft will be quoted as Kr. d. r. V.