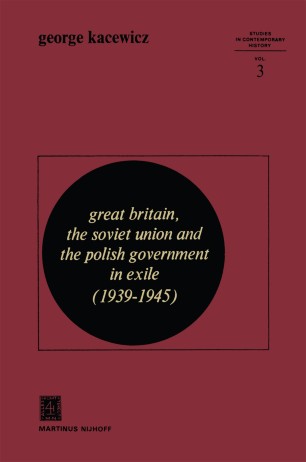 Great Britain, The Soviet Union and the Polish Government in Exile (1939–1945)

In this book I have attempted to analyze the dilemmas confronting the Polish government-in-exile in London during the Second World War. My main objective has beeen to investigate the actual operation of the Polish govern­ ment and the overall policies of the British government vis-a-vis the Soviet Union insofar as they had a direct bearing on Anglo-Polish relations. Since the outstanding conflicts over territorial claims, and, ultimately, sovereignty, were between Poland and the Soviet Union, considerable attention has been devoted to the relationship between the Polish and Soviet governments during a most trying and difficult period of inter-Allied diplomacy. This work covers the period of operation of the Polish government on British soil until the resignation of Prime Minister Stanislaw Mikolajczyk in November 1944. Although Great Britain did not withdraw diplomatic recognition from the Polish government until July 1945, the Arciszewski government, formed after Mikolajczyk's resignation, was generally ignored by Great Britain. As with all subsequent governments, including that which exists today, Arciszewski's government functioned primarily as the voice of Poland in the West - a government of protest.