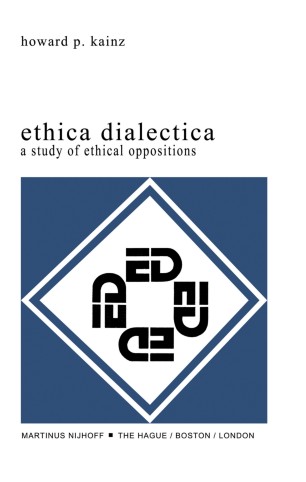 A Study of Ethical Oppositions

"Dialectic" is a fulcrum word. Aristotle attacked this belief, saying that the dialectic was only suitable for some purpose- to enquire into men's beliefs, to arrive at truths about eternal forms of things, known as Ideas, which were fixed and un­ changing and constituted reality for Plato. Aristotle said there is also the method of science, or "physical" method, which observes physical facts and arrives at truths about substances, which undergo change. This duality ofform and substance and the scientific method of arriving at facts about substances were central to Aristotle's philosophy. Thus the dethronement of dialectic from what Socrates and Plato held it to be was ab­ solutely essential for Aristotle, and "dialectic" was and still is a fulcrum word . . . I think it was Coleridge who said everyone is either a Plato­ nist or an Aristotelian . . . Plato is the essential Buddha-seeker who appears again and again in each generation, moving on­ ward and upward toward the "one. " Aristotle is the eternal motorcycle mechanic who prefers the "many. " R.