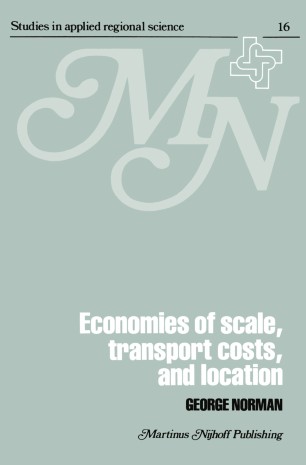 The presence of nonconvexities does severe damage to conventional theories of the firm and of the individual. The essential contribution of location theory, however, is in a world in which there are such nonconvexities. If resources are distributed evenly and the usual convexity assumptions made, then economic activity would be distributed evenly; there would be no concentration of pro­ duction. Thus the statement that is usually made, that the standard results carry over to a world in which there is spatial choice, is too weak and fails to capture the essence oflocation theory. Nevertheless, we must also concede that, while the introduction of the spatial dimension is interesting and fruitful when (perhaps only when) there are non­ convexities, space should not be thought of as a panacea whereby problems­ those associated with economies of scale, for example -can be made to disap­ pear. There is no guarantee, for example, that production units will be operated in convex regions of their total cost curves, even if they are constrained to oper­ ate in a 'space economy'. These considerations led to the conclusion that the role of spatial choice and the determinants of such choice would be best analysed by case study. This book is one such study. It is based on my doctoral dissertation at the University of Cambridge, fmanced by a grant from the Social Science Research Council.