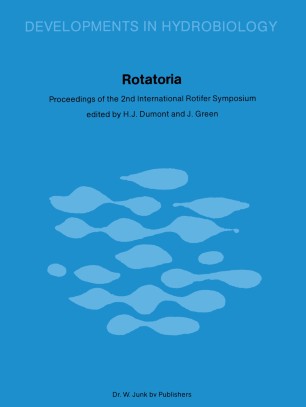 Part of the Developments in Hydrobiology book series (DIHY, volume 1)

At the end of the first international Symposium on Rotifers diately accepted to do this, and kindly made an entire in Lunz, Austria, September 1976, entousiastic pleas were special volume of its Journal 'Hydrobiologia' available made for a second gathering of possibly the same format for this purpose. Also, arrangements were made to have and spirit that had made the first one such a great success. the proceedings out as quickly as possible. The proceedings include all papers that were presented One of us (HJD), 'supported' herein by his friends Charles E. King and Jens Petter Nilssen in particular, tentatively in Gent, and two communications by collegues who could suggested that Gent University might host a meeting of not attend in person. They thus amount to 23 original con­ this kind, having in mind that since the Xlth congress of tributions, including the summaries of the workshops. All SIL in 1950, no other SIL activity had take places in have been reviewed by the editors, and many, in addition Belgium. In view of the relatively large number of Be1gian by one or more referees. Manuscripts have been adjusted, rotifer workers, many among which are or were active in wherever needed, for grammar, clarity of meaning, and Gent, this proposal sounded acceptable to the attendance length. However, where possible, the flavor of some per­ of the Lunz meeting, who then gave each other rendez sonal styles was left unaltered.