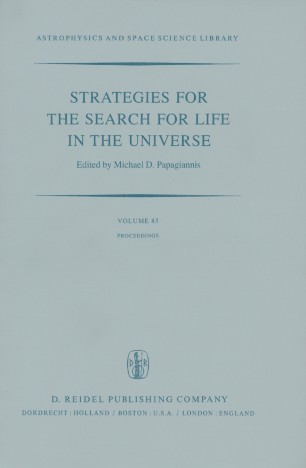 Strategies for the Search for Life in the Universe

Leo Goldberg Kitt Peak National Observatory Tucson, Arizona 85726, U. S. A. Of all the reasons for exploring the Universe, none is more com­ pelling than the possibility of discovering intelligent life elsewhere in the Universe. Still the quest for extraterrestrial life has been near the bottom of the astronomers' list of priorities, not because the number of extraterrestrial civilizations is conjectured to be van­ ishingly small, but because our powers of detection were thought to be far too weak. About ten years ago, however, the growing reach of ra­ dio telescopes on the ground and of optical and infrared telescopes in space persuaded a number of thoughtful astronomers that the time for a more serious search had arrived. Accordingly, a joint Soviet-American conference on the problems of Communication with Extraterrestrial In­ telligence was convened at the Byurakan Astrophysical Observatory of the Armenian Academy of Sciences during September 5-11, 1971 and was soon followed by a number of other important meetings, notably a series of NASA-sponsored workshops in the USA held between January, 1975 and May, 1976. Since SETI is fundamentally an international undertaking and as­ tronomical methods and techniques are required for its pursuit, it is natural for the International Astronomical Union to lend its support by sponsoring conferences and otherwise facilitating cooperation among countries. The active involvement of the I. A. U.