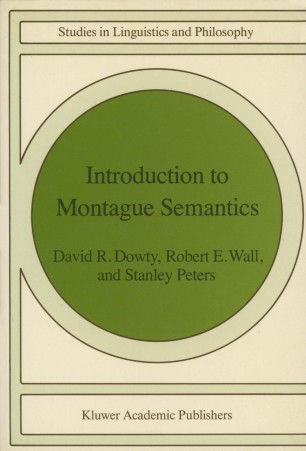 Part of the Studies in Linguistics and Philosophy book series (SLAP, volume 11)

In this book we hope to acquaint the reader with the fundamentals of truth­ conditional model-theoretic semantics, and in particular with a version of this developed by Richard Montague in a series of papers published during the 1960's and early 1970's. In many ways the paper 'The Proper Treatment of Quantification in Ordinary English' (commonly abbreviated PTQ) represents the culmination of Montague's efforts to apply the techniques developed within mathematical logic to the semantics of natural languages, and indeed it is the system outlined there that people generally have in mind when they refer to "Montague Grammar". (We prefer the term "Montague Semantics" inasmuch as a grammar, as conceived of in current linguistics, would contain at least a phonological component, a morphological component, and other subsystems which are either lacking entirely or present only in a very rudi­ mentary state in the PTQ system. ) Montague's work has attracted increasing attention in recent years among linguists and philosophers since it offers the hope that semantics can be characterized with the same formal rigor and explicitness that transformational approaches have brought to syntax. Whether this hope can be fully realized remains to be seen, but it is clear nonetheless that Montague semantics has already established itself as a productive para­ digm, leading to new areas of inquiry and suggesting new ways of conceiving of theories of natural language. Unfortunately, Montague's papers are tersely written and very difficult to follow unless one has a considerable background in logical semantics.