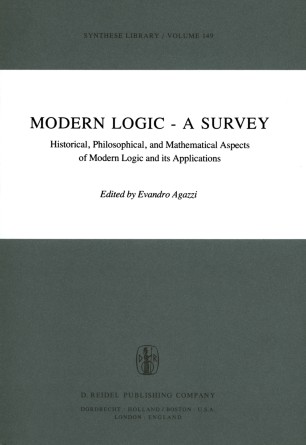 Historical, Philosophical and Mathematical Aspects of Modern Logic and its Applications

Logic has attained in our century a development incomparably greater than in any past age of its long history, and this has led to such an enrichment and proliferation of its aspects, that the problem of some kind of unified recom­ prehension of this discipline seems nowadays unavoidable. This splitting into several subdomains is the natural consequence of the fact that Logic has intended to adopt in our century the status of a science. This always implies that the general optics, under which a certain set of problems used to be con­ sidered, breaks into a lot of specialized sectors of inquiry, each of them being characterized by the introduction of specific viewpoints and of technical tools of its own. The first impression, that often accompanies the creation of one of such specialized branches in a diSCipline, is that one has succeeded in isolating the 'scientific core' of it, by restricting the somehow vague and redundant generality of its original 'philosophical' configuration. But, after a while, it appears that some of the discarded aspects are indeed important and a new specialized domain of investigation is created to explore them. By follOwing this procedure, one finally finds himself confronted with such a variety of independent fields of research, that one wonders whether the fact of labelling them under a common denomination be nothing but the contingent effect of a pure historical tradition.