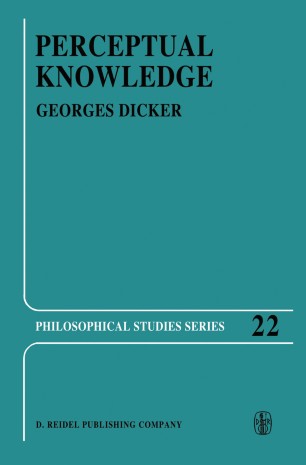 An Analytical and Historical Study

This book grew out of the lectures that I prepared for my students in epis­ temology at SUNY College at Brockport beginning in 1974. The conception of the problem of perception and the interpretation of the sense-datum theory and its supporting arguments that are developed in Chapters One through Four originated in these lectures. The rest of the manuscript was first written during the 1975-1976 academic year, while I held an NEH Fellowship in Residence for College Teachers at Brown University, and during the ensuing summer, under a SUNY Faculty Research Fellowship. I wish to express my sincere gratitude to the National Endowment for the Humanities and to the Research Foundation of the State University of New York for their support of my research. I am grateful to many former students, colleagues, and friends for their stimulating, constructive comments and criticisms. Among the former stu­ dents whose reactions and objections were most helpful are Richard Motroni, Donald Callen, Hilary Porter, and Glenn Shaikun. Among my colleagues at Brockport, I wish to thank Kevin Donaghy and Jack Glickman for their comments and encouragement. I am indebted to Eli Hirsch for reading and commenting most helpfully on the entire manuscript, to Peter M. Brown for a useful correspondence concerning key arguments in Chapters Five and Seven, to Keith Lehrer for a criticism of one of my arguments that led me to make some important revisions, and to Roderick M.