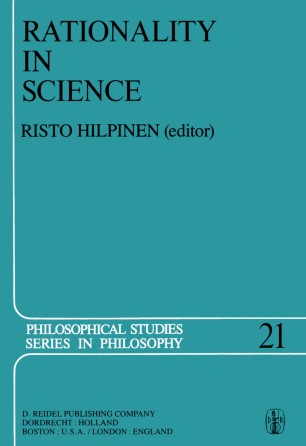 Studies in the Foundations of Science and Ethics

The present volume is a product of an international research program 'Foundations of Science and Ethics', launched in 1976 by the Inter­ University Centre of Post-Graduate Studies, Dubrovnik, Yugoslavia, with the financial support of the V olkswagen Foundation. According to the outline ofthe program, formulated in 1976 by a committee consisting of Professors Dagfinn F~llesdal, Rudolf Haller (coordinator), Lorenz Kruger, Karel Lambert, Keith Lehrer, Kuno Lorenz, Gunther Patzig, Ivan Supek and Paul Weingartner, its general purpose was to investigate the interplay of various internal and external factors in the development of science. Generous financial support from the Volkswagen Foundation made it possible to plan four annual conferences, the first of which was held in Dubrovnik on March 6-12, 1978. This volume contains the majority of the papers presented in the first Dubrovnik conference; the main theme of this conference was 'Rationality in Science and Ethics' (Some of the papers appear here in a thoroughly revised form. ) Further results of the research program will be discussed in three other conferences, to be held in Dubrovnik in 1979-1981; the papers presented in these conferences will be published separately. Professor Rudolf Haller of the University of Graz assumed the burden of the practical planning and organization of the first conference (as well as that of the other three conferences). I wish to thank Professor Haller on behalf of all participants for carrying out this demanding and time-consuming task.