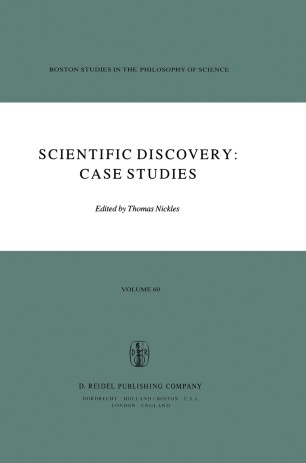 Part of the Boston Studies in the Philosophy of Science book series (BSPS, volume 60)

The history of science is articulated by moments of discovery. Yet, these 'moments' are not simple or isolated events in science. Just as a scientific discovery illuminates our understanding of nature or of society, and reveals new connections among phenomena, so too does the history of scientific activity and the analysis of scientific reasoning illuminate the processes which give rise to moments of discovery and the complex network of consequences which follow upon such moments. Understanding discovery has not been, until recently, a major concern of modem philosophy of science. Whether the act of discoyery was regarded as mysterious and inexplicable, or obvious and in no need of explanation, modem philosophy of science in effect bracketed the question. It concentrated instead on the logic of scientific explanation or on the issues of validation or justification of scientific theories or laws. The recent revival of interest in the context of discovery, indeed in the acts of discovery, on the part of philosophers and historians of science, represents no one particular method'ological or philosophical orientation. It proceeds as much from an empiricist and analytical approach as from a sociological or historical one; from considerations of the logic of science as much as from the alogical or extralogical contexts of scientific tho'¢tt and practice. But, in general, this new interest focuses sharply on the actual historical and contem­ porary cases of scientific discovery, and on an examination of the act or moment of discovery in situ.