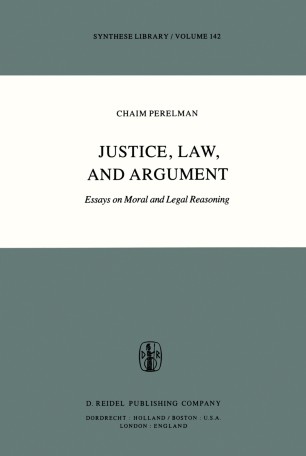 Essays on Moral and Legal Reasoning

This collection contains studies on justice, juridical reasoning and argumenta­ tion which contributed to my ideas on the new rhetoric. My reflections on justice, from 1944 to the present day, have given rise to various studies. The ftrst of these was published in English as The Idea of Justice and the Problem of Argument (Routledge & Kegan Paul, London, 1963). The others, of which several are out of print or have never previously been published, are reunited in the present volume. As justice is, for me, the prime example of a "confused notion", of a notion which, like many philosophical concepts, cannot be reduced to clarity without being distorted, one cannot treat it without recourse to the methods of reasoning analyzed by the new rhetoric. In actuality, these methods have long been put into practice by jurists. Legal reasoning is fertile ground for the study of argumentation: it is to the new rhetoric what mathematics is to formal logic and to the theory of demonstrative proof. It is important, then, that philosophers should not limit their methodologi­ cal studies to mathematics and the natural sciences. They must not neglect law in the search for practical reason. I hope that these essays lead to be a better understanding of how law can enrich philosophical thought. CH. P.