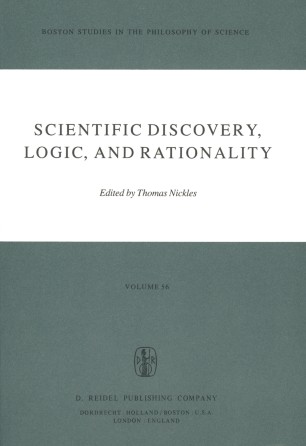 Part of the Boston Studies in the Philosophy of Science book series (BSPS, volume 56)

It is fast becoming a cliche that scientific discovery is being rediscovered. For two philosophical generations (that of the Founders and that of the Followers of the logical positivist and logical empiricist movements), discovery had been consigned to the domain of the intractable, the ineffable, the inscrutable. The philosophy of science was focused on the so-called context of justification as its proper domain. More recently, as the exclusivity of the logical reconstruc­ tion program in philosophy of science came under question, and as the critique of justification developed within the framework of logical and epistemological analysis, the old question of scientific discovery, which had been put on the back burner, began to emerge once again. Emphasis on the relation of the history of science to the philosophy of science, and attention to the question of theory change and theory replacement, also served to legitimate a new concern with the origins of scientific change to be found within discovery and invention. How welcome then to see what a wide range of issues and what a broad representation of philosophers and historians of science have been brought together in the present two volumes of the Boston Studies in the Philosophy of Science! For what these volumes achieve, in effect, is the continuation of a tradition which had once been strong in the philosophy of science - namely, that tradition which addressed the question of scientific discovery as a central question in the understanding of science.