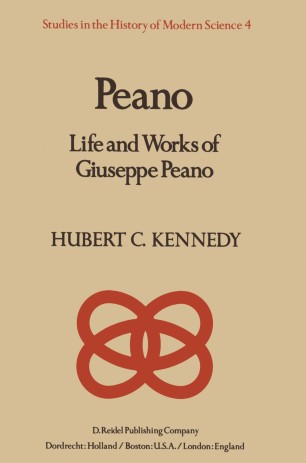 Life and Works of Giuseppe Peano

Part of the Studies in the History of Modern Science book series (SHMS, volume 4)

All students of mathematics know of Peano's postulates for the natural numbers and his famous space-filling curve, yet their knowledge often stops there. Part of the reason is that there has not until now been a full-scale study of his life and works. This must surely be surprising, when one realizes the length of his academic career (over 50 years) and the extent of his publica­ tions (over 200) in a wide variety of fields, many of which had immediate and long-term effects on the development of modern mathematics. A study of his life seems long overdue. It appeared to me that the most likely person to write a biography of Peano would be his devoted disciple Ugo Cassina, with whom I studied at the University of Milan in 1957-58. I wrote to Professor Cassina on 29 October, 1963, inquiring if he planned to write the biography, and I offered him my assistance, since I hoped to return to Italy for a year. He replied on 28 November, 1963, suggesting that we collaborate, meaning by this that I would write the biography, in English, using his material and advice. I gladly agreed to this suggestion, but work on the project had hardly begun when Professor Cassina died unexpectedly on 5 October, 1964. I then decided to continue the project on my own. I spent the academic year 1966-67 in Turin; completion of the book took ten years.