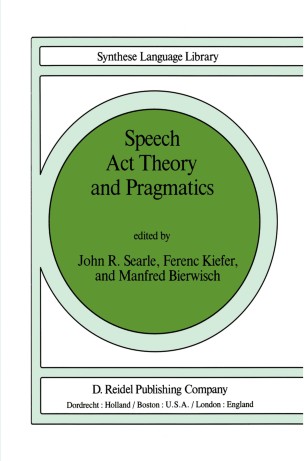 Part of the Texts and Studies in Linguistics and Philosophy book series (SLAP, volume 10)

In the study of language, as in any other systematic study, there is no neutral terminology. Every technical term is an expression of the assumptions and theoretical presuppositions of its users; and in this introduction, we want to clarify some of the issues that have surrounded the assumptions behind the use of the two terms "speech acts" and "pragmatics". The notion of a speech act is fairly well understood. The theory of speech acts starts with the assumption that the minimal unit of human communica­ tion is not a sentence or other expression, but rather the performance of certain kinds of acts, such as making statements, asking questions, giving orders, describing, explaining, apologizing, thanking, congratulating, etc. Characteristically, a speaker performs one or more of these acts by uttering a sentence or sentences; but the act itself is not to be confused with a sentence or other expression uttered in its performance. Such types of acts as those exemplified above are called, following Austin, illocutionary acts, and they are standardly contrasted in the literature with certain other types of acts such as perlocutionary acts and propositional acts. Perlocutionary acts have to do with those effects which our utterances have on hearers which go beyond the hearer's understanding of the utterance. Such acts as convincing, persuading, annoying, amusing, and frightening are all cases of perlocutionary acts.