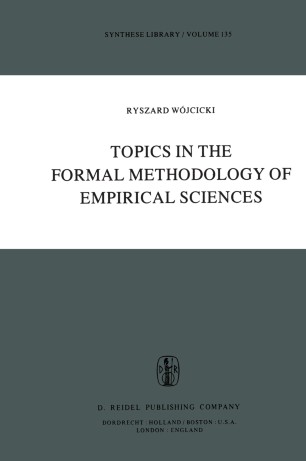 Topics in the Formal Methodology of Empirical Sciences

11 original. Modifications which I introduced are radical and often far going. In my opinion the Polish text had two main drawbacks. It was overloaded with informal considerations and at the same time formal concepts included in some parts of the book were presented in a too complicated way. Of course one of the motives to revise it was also the fact that much time has passed since I finished writing the Polish version and obviously certain decisions and ideas contained in the first edition seem not quite relevant now. So it is not only the desire to make the exposition clearer but also the reasons of substantial nature which motivated writing a revised version. I do not think it desirable to bother the reader with a detailed discussion of all changes to which the Polish version was subjected and that is why I will confine myself to pointing out only the most significant ones. Explanations concerning logical and set-theoretical notions applied in the book have been shortened as much as possible, in the Polish version one whole chapter was devoted to the discussion of them.