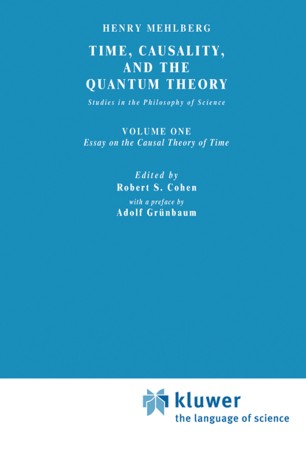 Studies in the Philosophy of Science. Vol. 1: Essay on the Causal Theory of Time

Part of the Boston Studies in the Philosophy of Science book series (BSPS, volume 19-1)

An intermittent but mentally quite disabling illness prevented Henry Mehlberg from becoming recognized more widely as the formidable scholar he was, when at his best. During World War II, he had lived in hiding under the false identity of an egg farmer, when the Nazis occupied his native Poland. After relatively short academic appointments at the University of Toronto and at Princeton University, he taught at the University of Chicago until reaching the age of normal retirement. But partly at the initiative of his Chicago colleague Charles Morris, who had preceded him to a 'post-retirement' profes­ sorship at the University of Florida in Gainesville, and with the support of Eugene Wigner, he then received an appointment at that University, where he remained until his death in 1979. In Chicago, he organized a discussion group of scholars from that area as a kind of small scale model of the Vienna Circle, which met at his apart­ ment, where he lived with his first wife Janina, a mathematician. It was during this Chicago period that the functional disturbances from his illness were pronounced and not infrequent. The very unfortunate result was that colleagues who had no prior knowledge of the caliber of his writings in Polish and French or of his very considerable intellectual powers, had little incentive to read his published work, which he had begun to write in English.