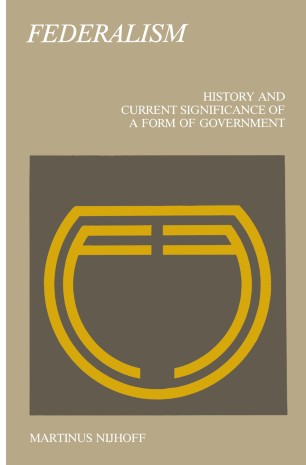 History and Current Significance of a Form of Government

The commemoration of the formation of the Union of Utrecht, four hundred years ago on 23 January 1579, was celebrated by many different events. One of these, certainly not the least important to historians, was the holding of an inter­ national congress in Utrecht and Zeist on 8, 9 and 10 May 1979, organized by the Dutch Historical Association. This Association had decided to select a theme which fitted well in the framework of the Union celebrations: federalism, history and current significance of a form of government. For the Union of Utrecht con­ stituted the legal foundation, even the constitution, it is claimed, of the Republic of the United Netherlands, and that commonwealth can undoubtedly be regard­ ed as a very interesting example of a federal form of government. As is evident from the formulation of the congress theme the intention of the or­ ganizers was that attention should be given not only to federal and regional struc­ tures and tendencies in the past but also in the contemporary world. Historical phenomena needed (necessarily) to be viewed in present-day perspective, current problems ought if possible to be seen in historical perspective. There is no doubt that the prevailing view today, at least in the Western World, is to a great extent characterized by a growing dislike of the modern Leviathan, the highly centraliz­ ed, bureaucratic welfare State.