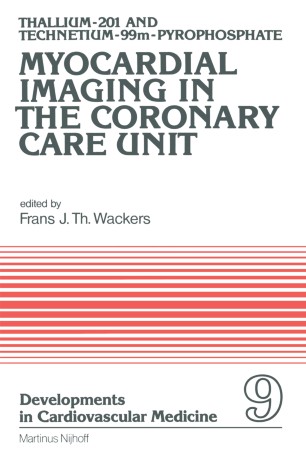 Noninvasive visualization of myocardial infarction using radionuclides dates back over eighteen years. Edward A. Carr and William H. Beierwaltes were first to report (1962) successful external imaging of myocardial infarcts in dogs and in man using an Anger scintillation camera. They demonstrated that after intravenous administration of 86Rb or l3ICS an infarct was visualized as a "cold spot", while 203Hg-labeled-chlormeridin resulted in a "hot-spot" image of the infarct. Since then, there have been major developmental improvements in avail­ able radionuclides, scintillation cameras and computer processing capabilities. In particular, the development of mobile gamma cameras opened the possi­ bility to obtain high quality images even at the bedside of critically ill patients. Since the development in 1974 of a new radiopharmaceutical, 20lTI and the application of 99mTc-pyrophosphate for myocardial imaging, these imaging agents are widely used for the detection of acute myocardial infarction. However, for practical application, frequently there appears to be uncertainty or even confusion concerning the relative merits of each method.