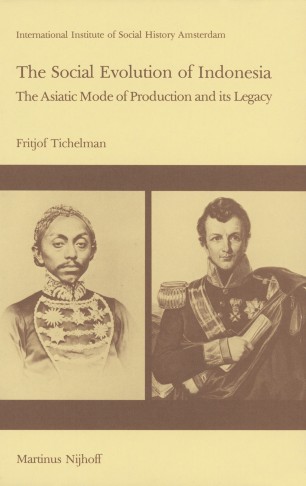 The Social Evolution of Indonesia

The Asiatic Mode of Production and Its Legacy

At a fairly early stage of socialism's penetration into the Afro-Asian world, a handful of European social democrats established an Indian Social-Democratic Association (lSDV). They did so in a country, Indonesia, that was economically little developed and far away from any of the centres of European socialism and Asiatic radical-national­ ism. The ISDV was soon able to bring its influence to bear on sec­ tions of the urban proletariat and to build up an Indonesian revol­ utionary movement. This occurred in sharp competition with a nascent nationalist leadership, and then without the usual inter­ mediary role played by radicalizing groups of native intelligentsia. In this way, Dutch social democrats laid the foundations for one of the first communist parties in Asia and Africa, a party which was des­ tined to become one of the few communist mass parties of the Third World. However, in contrast to the major communist movements of China-Vietnam, this Indonesian party was to demonstrate a basic weakness: successive and catastrophic defeats. ! If we leave out Japan, the only non-Western country where a capi­ talist industrial revolution occurred, we see that foreign and particu­ larly Western minorities frequently did playa dominant role in the initial and formative phases of the socialist and workers' movements of the Afro-Asiatic world.