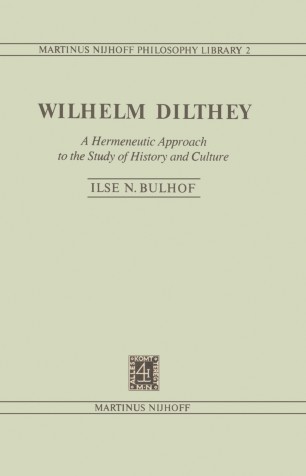 A Hermeneutic Approach to the Study of History and Culture

Philosophy originates in man's amazement over the richness and complexity of reality. It attempts to articulate in words and con­ cepts what reality is. Starting from the recognition that this reality is experienced by all humans but experienced in many different ways, the philosopher tries to find reality's heart, its center, its hidden treasure - the tree in the middle connecting heaven and earth, the central point from which the stupendous intricacy of experience begins to make sense and from which order can become visible. To ask "what is reality?" is, indeed, to recognize that we have entered a maze. The hermeneutic philosophy of Wilhelm DiIthey (1833-1911) is the fruit of his own wanderings in this maze. Like many intellectuals of his age, he had lost faith in the Christian religion in which he was raised. In his college years, he turned from theology to philosophy, in particular, the history of philosophy and of human thought in general - wondering about the origin and value of the astounding variety of past belief systems. At the center of reality's maze he found the insight that reality as faced by man is comparable to a literary text: it "means" something to us. Reality is not a mute object, but an autonomous source of meaning, an act of self-disclosure; knowledge of reality is therefore not the product of actions per­ formed by an active subject upon a passive object, but a com­ municative interaction between two SUbjects.