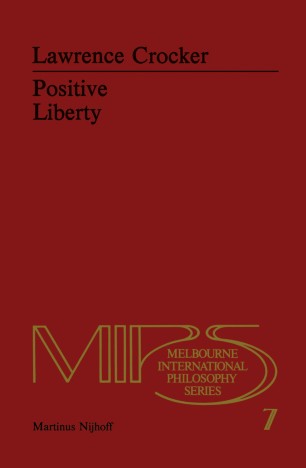 An Essay in Normative Political Philosophy

Liberty is perhaps the most praised of all social ideals. Rare is the modern political movement which has not inscribed "liberty," "freedom," "liber­ ation," or "emancipation" prominently on its banners. Rarer still is the political leader who has spoken out against liberty, though, of course, some have condemned "license. " While there is overwhelming agreement on the value of liberty, however, there is a great deal of disagreement on what liberty is. It is this fact that explains how it is possible for the most violently opposed of political parties to pay homage to the "same" ideal. From among the many ways liberty is understood, this essay will be concerned with only two. The first takes liberty to be the absence of human interference with the individual's actions. This is the way liberty has been understood by the Anglo-American "liberal" tradition from Thomas Hobbes in the seventeenth century to l. S. Mill in the nineteenth to such contemporary, and very dissimilar, political philosophers as John Rawls and Robert Nozick. The "absence of interference" school is far from monolithic in its understanding of liberty, but it is united in its opposition to a rival account on which liberty is not taken to be the absence of human interference but rather the presence of diverse pos­ sibilities or opportunities.