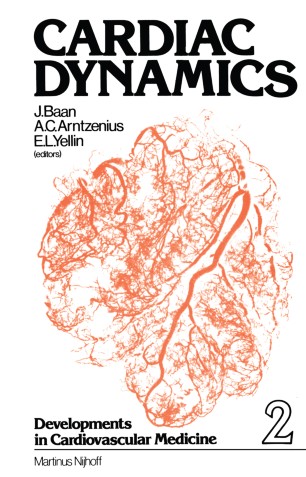 Cardiac Dynamics is the name of a relatively young field of study, born from the fruitful interaction between branches of two different disciplines: medicine and physics. "Dynamics" is the branch of physics which deals with the action of forces on bodies or particles in motion or at rest. "Cardiac" relates to the clinical field of cardiology but also to cardiophysiology, both of which are specialized branches of medicine. Narrower than the well­ established field of Hemodynamics, Cardiac Dynamics is restricted to dynamic phenomena occurring in and around the heart. The mathematical treatment of such phenomena, however, is vastly more complex because of the intricate nature of the mechanisms involved in the cardiac action. Thus, whereas hemodynamics is concerned with predominantly passive (visco-) elastic structures - vessels - containing time-variant flow of viscous flui- blood -, the mechanical study of the heart requires additional con­ siderations such as: active elastic components representing the contractile mechanism of cardiac muscle, complex geometry and fiber structure in the myocardial wall, autoregulatory mechanisms, and intricate flow patterns associated with valve motion. Viewed in this light it is not surprising that attempts to describe ventricular pump function and to quantify contractile performance have not reached the level of sophistication which is common in e. g. arterial hemodynamics. For the same reason, many of the often simplified approaches to describe ventricular mechanics failed to stand up to more rigorous theoretical, experimental or clinical testing.