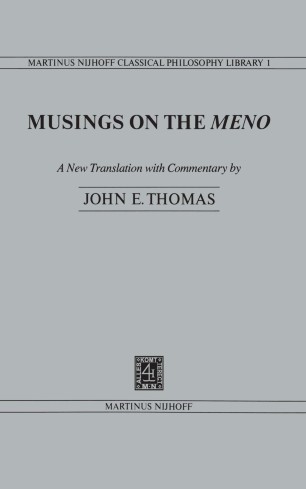 Musings on the Meno

The objectives of this book are to provide a new translation of Plato's M eno together with a series of studies on its philcisophical argument in the light of recent secondary literature. My translation is based mainly on the Oxford Classical Text, 1. Burnet's Platonis Opera (Oxford Clarendon Press 1900) Vol. III. In conjunction with this I have made extensive use of R.S. Bluck's Plato's Meno (Cam­ bridge University Press, 1964). At critical places in the dialogue I have also consulted A. Croiset's Gorgias, Menon (Bude text). My debt ~o two other sources will be clearly in evidence. They are E.S. Thompson's Plato's Meno (London, MacMillan 1901), and St. George Stock's The Meno of Plato (Oxford Clarendon Press, 1894). One of the greatest difficulties facing a translator is to achieve a balance between accuracy and elegance. Literal translations are more likely to be accurate, but, alas, they also tend to be duller. Free translations run into the opposite danger of paying for elegance and liveliness with the coin of inaccuracy. Another hurdle, for a translator of a Platonic dialogue, is posed by the challenge to maintain the conversational pattern and fast­ moving character of the discussion. This is easier where the exchang~s are short, but much more difficult where Socrates gets somewhat long-winded.