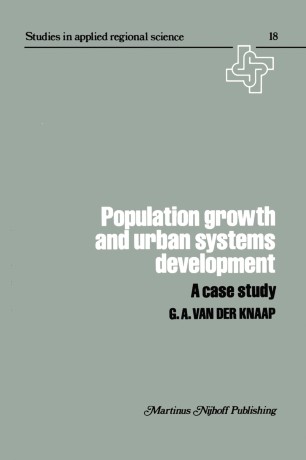 The study of the evolution of an urban system raises a number of practical questions, as to the operational definition of the components of the system as well as to the incorporation of the factor time in the analysis. In this chapter the fo­ cuss is on the urban centres, the nodes of the urban system. One of the first pro­ blems to be solved now is the definition of such a node. It has been argued above that population size can be used as an approximation of the complexity of the spatial economic structure of a region. The acceptation of this notion makes it possible to study the urban system as a population system. The analysis of the population system over the study period will be pursued from this perspective. The study period, 1840-1970, covers completely the industrialization and urbanization phase which occurred during the industrial revolution. Over this period the spatial organizational structure of society evolved from a rural-commercial to­ wards a modern urban-industrial state. One of the major events in this period of change is the spatial redistribution of the population and the population growth. This process will be examined below at three levels of aggregation: (I) the popu­ lation distribution as one frequency distribution, (2) the population distribution dis aggregated into a n~ber of size classes, and (3) the individual cities which make up the population distribution.