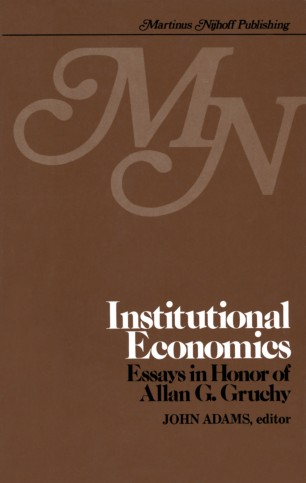 Contributions to the Development of Holistic Economics Essays in Honor of Allan G. Gruchy

Allan Garfield Gruchy, now Professor Emeritus at The University of Maryland, retired in 1977 from full-time duty. That he continued to teach his graduate seminar in institutional economics and simply accelerated work on a major study of planning in world economies is only more evidence of the energy and concern he has brought to his teaching and writing through­ out his career. His undergraduate classes in comparative economic systems and modern economic thought, and his two graduate courses on institu­ tionalism, were always among the most popular in the department. They were firmly grounded in a perspective that opened the minds of hundreds of students to new avenues of thought and to different modes of economic organization. Returning students who report they quickly forgot the arid intricacies of intermediate theory courses nonetheless recall Allan's verbal thrusts at orthodox positions and at the shortcomings of American eco­ nomic institutions. Allan worked for many years with Dudley Dillard to construct Maryland's present department and served ably as acting chairman in 1976-77 after Dudley relinquished the chairmanship. His impatient wit enlivened faculty meetings and rendered them expeditious in the extreme, and it was welcomed by all except those with a penchant for pontification. Allan is best known among economists for his elucidation of institutional and neoinstitutional thought and for his comparative analysis of planning v vi PREFACE and growth.