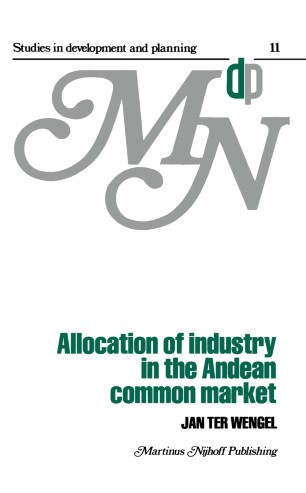 Allocation of Industry in the Andean Common Market

Part of the Studies in Development and Planning book series (SDAP, volume 11)

The objective of this text is to develop and implement a model for allocating the industries of the Sectorial Programs of Industrial Development of the Andean Common Market. In the Andean Common Market, as in most other integration schemes among less developed countries, the main expectations regarding the promotion of economic growth are based on the expectation of increased opportunities for import substituting industrialization. The concern here is with the Andean Common Market in particular because it has been the economic integration scheme that has most explicitly recognized the objective of the less developed countries of taking advantage of the new opportunities for industrial­ ization created by the combination of the individual markets. In the Andean Common Market the importance attached to the expectation of the gains from industrialization was expressed in the formulation of Sectorial Programs of Industrial Development. Other integration schemes among less developed coun­ tries have not addressed the issue of import substituting industrialization in such detailed manner. In the first section of this chapter the importance of the topic of allocating industries in integration schemes among less developed countries is discussed. It is argued that the benefits to be derived from increased trade in the traditional products of the member countries are minimal. Instead, the member countries 1 2 ALLOCATION OF INDUSTRY IN THE ANDEAN COMMON MARKET expect the benefits from economic integration schemes to be derived from the utilization of the opportunities for industrialization created by such schemes.