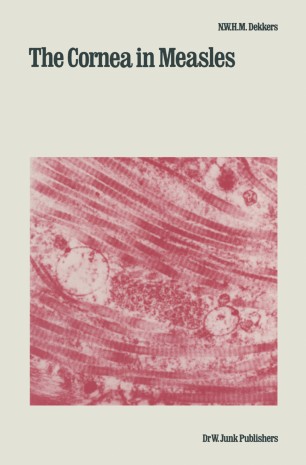 The Cornea in Measles

Part of the Monographs in Ophthalmology book series (MIOP, volume 3)

The need to study the corneal complications of measles was not very obvious. Everyone knew of the (kerato) conjunctivitis of measles and considered it to be an innocuous feature of the disease. Every medical worker in developing countries knew that measles in under- or malnourished children runs a very serious course leading to, e. g. , corneal The latter are seen frequently that medical workers in complications. developing countries are in the habit of speaking of post-measles blind­ ness. The aspect of the cornea in post-measles blindness is reminiscent of the keratomalacia in vitamine A deficiency and kwashiorkor. It was suggested that in measles the last reserves of vitamine A are exhausted, thereby precipitating the keratomalacia. The virological origin of measles keratitis has been more or less neglected in literature up till now. This study provides clinical and laboratory data concerning the kerato­ conjunctivitis of measles, gathered from a number of hospitalized children in a rural area of Kenya. The merits of this monograph is that it gives a careful description of the clinical course of measles keratoconjunctivitis and that it emphasizes the role of the virus-infection in addition to protein deficiency and vitamine A-deficiency in the etiology of post-measles blind­ ness. The possible roles of exposure in semi-comatose patients and of the application of traditional autochthone medicine are mentioned. Measles is no longer seen in developed countries but will still be encountered in the developing countries.