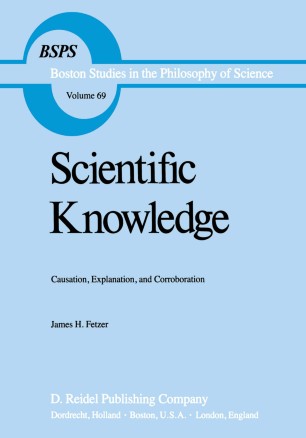 Part of the Boston Studies in the Philosophy of Science book series (BSPS, volume 69)

With this defense of intensional realism as a philosophical foundation for understanding scientific procedures and grounding scientific knowledge, James Fetzer provides a systematic alternative to much of recent work on scientific theory. To Fetzer, the current state of understanding the 'laws' of nature, or the 'law-like' statements of scientific theories, appears to be one of philosophical defeat; and he is determined to overcome that defeat. Based upon his incisive advocacy of the single-case propensity interpretation of probability, Fetzer develops a coherent structure within which the central problems of the philosophy of science find their solutions. Whether the reader accepts the author's contentions may, in the end, depend upon ancient choices in the interpretation of experience and explanation, but there can be little doubt of Fetzer's spirited competence in arguing for setting ontology before epistemology, and within the analysis of language. To us, Fetzer's ambition is appealing, fusing, as he says, the substantive commitment of the Popperian with the conscientious sensitivity of the Hempelian to the technical precision required for justified explication. To Fetzer, science is the objective pursuit of fallible general knowledge. This innocent character­ ization, which we suppose most scientists would welcome, receives a most careful elaboration in this book; it will demand equally careful critical con­ sideration. Center for the Philosophy and ROBERT S. COHEN History of Science, MARX W. WARTOFSKY Boston University October 1981 v TABLE OF CONTENTS EDITORIAL PREFACE v FOREWORD xi ACKNOWLEDGEMENTS xv PART I: CAUSATION 1.