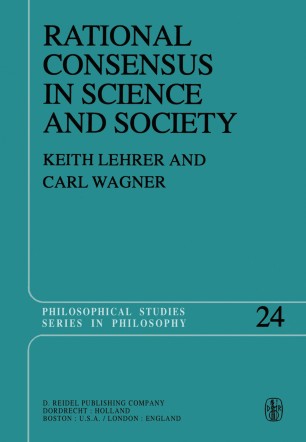 Rational Consensus in Science and Society

A Philosophical and Mathematical Study

TItis book is the joint project of a philosopher, Lehrer, and a mathematician, Wagner. The book is, therefore, divided into a first part written by Lehrer, which is primarily philosophical, and a second part written by Wagner that is primarily formal. The authors were, however, influenced by each other throughout. Our book articulates a theory of rational consensus in science and society. The theory is applied to politics, ethics, science, and language. We begin our exposition with an elementary mathematical model of consensus developed by Lehrer in a series of articles [1976a, 1976b, 1977, 1978]. Chapter 3 contains material from [1978]. Lehrer formulated the elementary model when he was a Fellow of the Center for Advanced Study in the Be­ havioral Sciences, Stanford, in 1973 with the invaluable mathematical assist­ of Kit Fine, Gerald Kramer and Lionel McKenzie. In the summer of ance 1977, Lehrer and Wagner met at the Center in a Summer Seminar on Freedom and Causality supported by the Andrew W. Mellon Foundation. Wagner read the manuscript of Lehrer [1978] and subsequently solved some mathematical problems of the elementary model. After discussions of philosophical prob­ lems associated with that model, Wagner developed the foundations for the extended model. These results were reported in Wagner [1978, 1981a].