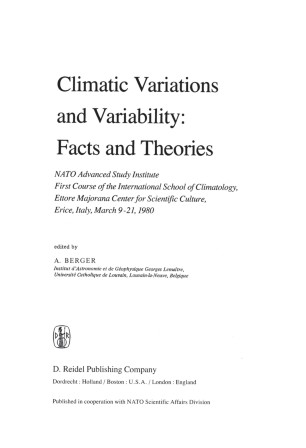 GENERAL INTRODUCTION TO THE ETTORE MAJORANA INTERNATIONAL SCHOOL OF CLIMATOLOGY The "Ettore Majorana Centre" for Scientific Culture, founded at Erice in 1963 by prof. Nino Zichichi, pursues the fundamental aim to create in Europe a cultural forum of high scientific standard, which can allow young research workers to appreciate current problems of major interest in the various fields of scientific research. , Since the beginning, its International Schools (over 70, today) have actively worked in disseminating scientific culture produced at the most advanced frontiers of human knowledge, spanning varied domains from biology to nuclear physics, earth sciences, meteorology, architecture, medical sciences and so on, Recently, in 1979, the International School of Climatology has been created with the purpose to organize post-doctorate cour ,;es, in which outstanding and up-to-date outlooks, theories and results in the climatic field must be presented in didactic form. Climatic variability was the subject of the first Course, in that climatic changes represent one of the most exciting phenomenologies to study; in fact, even if the climate has changed many times in the past, so making it reasonable to as­ sume that it will do so in the future, it is still not easy to understand the above mentioned changes from an hydrodynamical point of view.