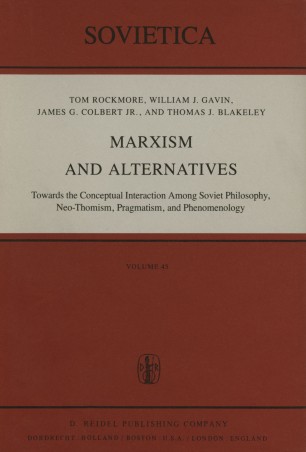 Towards the Conceptual Interaction Among Soviet Philosophy, Neo-Thomism, Pragmatism, and Phenomenology

Contemporary philosophy is by its nature pluralistic, to a perhaps greater extent than at any moment of the preceding tradition, in that there are multiple forms of thought competing for a position on the center of the philosophic stage. The reasons for this conceptual proliferation are numerous. But certainly one factor is the increasing development of contemporary means of publication and communication, which in turn make possible the rapid dissemination of ideas as well as an informed reaction to them. And this in turn has increased the possibility for serious philosophic exchange by enhancing the available opportunities for the interaction of competing forms of thought. But, although informed philosophic interaction has in principle become increasingly possible in recent years, the frequency, scope and quality of such discussion has often been less than satisfactory. Contemporary philosophic viewpoints tend not to interact in a Hegelian manner, as complementary aspects of a totally satisfactory and a-perspectival view, facets of a singly and all-embracing true position. Rather, contemporary philosophic viewpoints tend to portray themselves as mutually exclusive alternatives only occasionally willing to acknowledge the possible validity or even the intrinsic interest of other perspectives. Thus, although the multiplication of different forms of philosophy in principle means that there are greater possibilities for meaning­ ful exchange between them, in practice the tendency of each of the various philosophic positions to raise claims to philosophic truth from its point of view alone has had the effect of impeding such interaction.