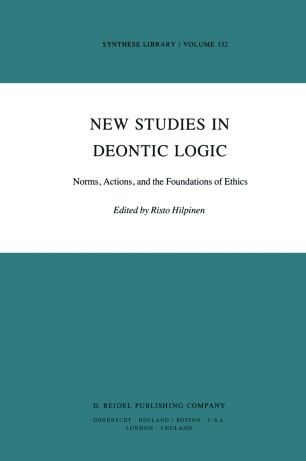 Norms, Actions, and the Foundations of Ethics

The present volume is a sequel to Deontic Logic: Introductory and Systematic Readings (D. Reidel Publishing Company, Dordrecht 1971): its purpose is to offer a view of some of the main directions of research in contemporary deontic logic. Most of the articles included in Introductory and Systematic Readings represent what may be called the standard modal approach to deontic logic, in which de on tic logic is treated as a branch of modal logic, and the normative concepts of obligation, permission and prohibition are regarded as analogous to the "alethic" modalities necessity, possibility and impossibility. As Simo Knuuttila shows in his contribution to the present volume, this approach goes back to late medieval philosophy. Several 14th century philosophers observed the analogies between deontic and alethic modalities and discussed the deontic interpretations of various laws of modal logic. In contemporary deontic logic the modal approach was revived by G. H. von Wright's classic paper 'Deontic Logic' (1951). Certain analogies between deontic and alethic modalities are obvious and uncontroversial, but the standard approach has often been criticized on the ground that it exaggerates the analogies and tends to ignore those features of normative concepts which distinguish them from other modalities.