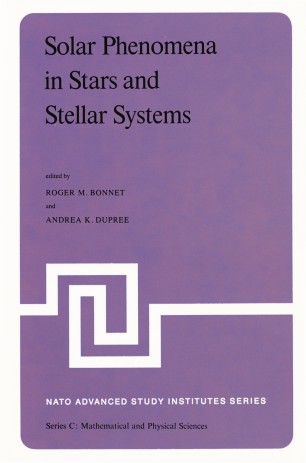 This book represents the proceedings of a NATO Advanced Study Institute which was held at Bonas from August 25 till Sep­ tember 5, 1980 and was devoted to the study of "Solar Phenomena in Stars and Stellar Systems". It is intended for a broad audi­ ence. Students and post-doctoral scientists for example can dis­ cover new aspects of astrophysics. The general spirit of the ASI was aimed at presenting a unified aspect of astrophysical phenomena which can be studied intensively on the Sun although they are of a much more general nature. On the other hand, spe­ cialists in solar or stellar physics will find here the latest theoretical developments and/or the most recent observations made in their own field of research. An extensive bibliography will be found throughout the various sections, to which the reader may refer, for more detailed developments in various specific areas. In the past, stellar and solar astrophysics have more or less followed their own independent tracks. However, with the rapid development of modern techniques, in particular artificial satellites like the International Ultraviolet Explorer and the Einstein Observatory, which provide a new wealth of data, it appears that chromospheres, coronae, magnetic fields, mass loss and stellar winds, etc . . . . , are found not only in the Sun but occur also in other stars. Frequently these other stars represent quite different conditions of gravity, lumino~ity, and other parameters from those occurring in the Sun.