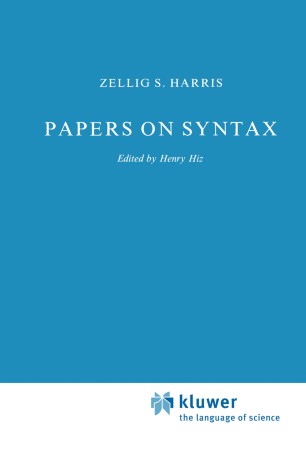 The selection of papers reprinted here traces the development of syntax from structural linguistics through transformational linguistics to operator gram­ mar. These three are not opposing views or independent assumptions about language. Rather, they are successive stages of investigation into the word­ combinations which constitue the sentences of a language in contrast to those which do not. Throughout, the goal has been to find the systemati­ cities of these combinations, and then to obtain each sentence in a uniform way from its parts. In structural analysis, the parts were words (simple or complex, belonging to particular classes) or particular sequences of these. In transformational analysis, it is found that the parts of a sentence are elementary sentences, whose parts in turn are simple words of particular classes. The relation between these two analyses is seen in the existence of an intermediate stage between the two, presented in paper 4, From Morpheme to Utterance. A further intermediate stage is presented in the writer's String Analysis of Sentence Structure, Papers on Formal Linguistics I, Mouton, The Hague 1962 (though it was developed after transformations, as a syntactic rep­ resentation for computational analysis). Generalization of both of these analyses leads to operator grammar, in which each sentence is derived in a uniform way as a partial ordering of the originally simple words which enter into it: Each step (least upper bound) of the partial ordering (of a word requiring another) forms a sentence which is a component of the sentence being analyzed.