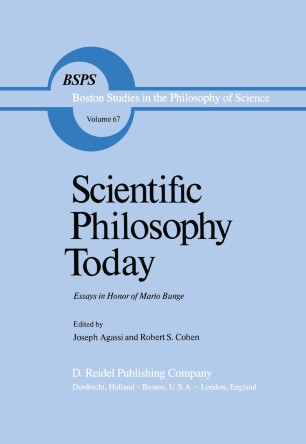 Essays in Honor of Mario Bunge

Part of the Boston Studies in the Philosophy of Science book series (BSPS, volume 67)

This volume is dedicated to Mario Bunge in honor of his sixtieth birthday. Mario Bunge is a philosopher of great repute, whose enormous output includes dozens of books in several languages, which will culminate with his Treatise on Basic Philosophy projected in seven volumes, four of which have already appeared [Reidel, I 974ff. ]. He is known for his works on research methods, the foundations of physics, biology, the social sciences, the diverse applications of mathematical methods and of systems analysis, and more. Bunge stands for exact philosophy, classical liberal social philosophy, rationalism and enlightenment. He is brave, even relentless, in his attacks on subjectivism, mentalism, and spiritualism, as well as on positivism, mechanism, and dialectics. He believes in logic and clarity, in science and open-mindedness - not as the philosopher's equivalent to the poli­ tician's rhetoric of motherhood and apple pie, but as a matter of everyday practice, as qualities to cultivate daily in our pursuit of the life worth living. Bunge's philosophy often has the quality of Columbus's egg, and he is prone to come to swift and decisive conclusions on the basis of argu­ ments which seem to him valid; he will not be perturbed by the fact that most of the advanced thinkers in the field hold different views.