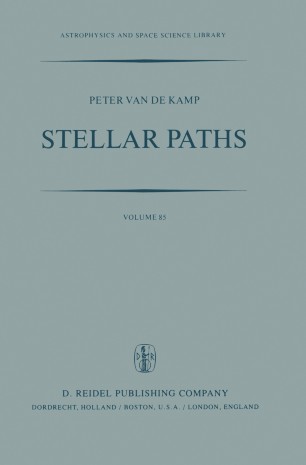 This is the latest effort in a sequence of presentations begun in 1949 with a series of lectures on long-focus photographic astrometry given by the author as Fulbright professor in Paris at the invitation by the late H. Mineur, at that time Director of the Institut d' Astrophysique. These earlier lectures were published as a series of review articles in Popular Astronomy (1951) and appeared both as Contributions de l'Institut d'Astrophysique, Serie A, No. 81 and as reprint No. 75 of Sproul Observatory. A more elaborate presenta­ tion was given in 1963 in Stars and Stellar Systems, which was followed by Principles of Astrometry (1967, W. H. Freeman & Co.). During the second half of 1974, again under Fulbright auspices, at the invitation of Pik Sin The, I lectured at the Astronomical Institute in Amster­ dam, followed by a short course in May-June 1978 at the invitation of E. P. J. van den Heuvel. I gave a more extensive course at the Institut d' As­ trophysique at the invitation of J. C. Pecker of the College de France and of J. Audouze, Director of the LA.P. Both in Amsterdam and in Paris I had presented occasional astrometric topics at various times. The opportunity to lecture in France and in Holland has facilitated, influenced and improved the organization and contents of the presentations on the subject of long-focus photographic astrometry.