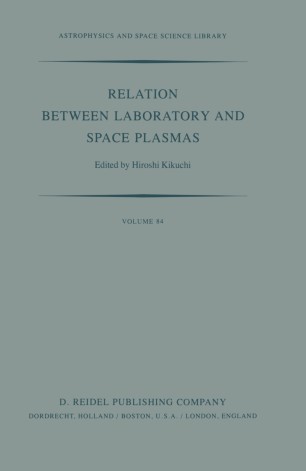 Relation Between Laboratory and Space Plasmas

This book contains the lectures presented at the International Workshop on Relation between Laboratory and Space Plasmas held at Gakushi-Kaikan (University Alumni Association) Kanda in Tokyo, Japan on 14 - 15 April, 1980. Its aim was to bring together laboratory, fusion and space plasma physicists and to highlight the communality of basic plasma phenomena, similarities and differences observed in the laboratory and in space, thus exchanging information tnd views on new ideas to link both areas. Although similar type of conferences were held in Europe and recently in the States, this is the first time we have had in Japan for such an international meeting, which may be regarded as an extended version of our national Workshop held twice at the Institute of Plasma Physics of Japan (IPPJ) in 1976 and in 1977 (IPPJ Research Report No. 286 and No. 365). The Workshop consisted of seven regular sessions and one special session with approximately ninety participants from allover the world. Thirty-six papers, invited and contributed, were presented, nine from U. S. A., three from U. S. S. R., two of each from Germany, France, India, one of each from Sweden, Canada, Belgium and fifteen from Japan. The topics covered were: (1) The Critical Velocity (2) Beam Plasma Discharges and Interactions (3) Double Layers and Shocks (4) Instabilities in the Equatorial and Auroral Electrojets (5) Turbulent and Anomalous Plasmas (6) Plasma Irregularities (7) Solar Plasma Phenomena (8) Active Experiments in Space Plasmas and Their Simulation in the Laboratory.