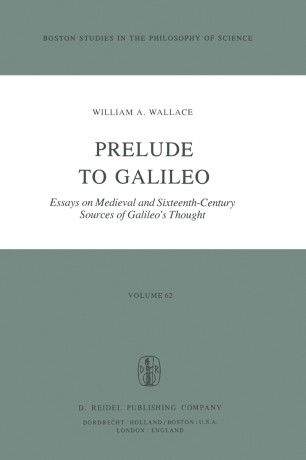 Essays on Medieval and Sixteenth-Century Sources of Galileo’s Thought

Part of the Boston Studies in the Philosophy of Science book series (BSPS, volume 62)

Can it be true that Galilean studies will be without end, without conclusion, that each interpreter will find his own Galileo? William A. Wallace seems to have a historical grasp which will have to be matched by any further workers: he sees directly into Galileo's primary epoch of intellectual formation, the sixteenth century. In this volume, Wallace provides the companion to his splendid annotated translation of Galileo 's Early Notebooks: The Physical Questions (University of Notre Dame Press, 1977), pointing to the 'realist' sources, mainly unearthed by the author himself during the past two decades. Explicit controversy arises, for the issues are serious: nominalism and realism, two early rivals for the foundation of knowledge, contend at the birth of modem science, OI better yet, contend in our modem efforts to understand that birth. Related to this, continuity and discontinuity, so opposed to each other, are interwoven in the interpretive writings ever since those striking works of Duhem in the first years of this century, and the later studies of Annaliese Maier, Alexandre Koyre and E. A. Moody. Historio­ grapher as well as philosopher, WaUace has critically supported the continuity of scientific development without abandoning the revolutionary transforma­ tive achievement of Galileo's labors. That continuity had its contemporary as well as developmental quality; and we note that William Wallace's Prelude studies are complementary to Maurice A.