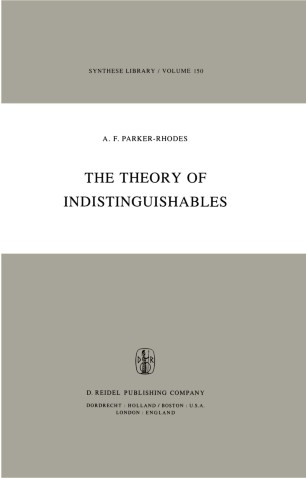 A Search for Explanatory Principles Below the Level of Physics

It is widely assumed that there exist certain objects which can in no way be distinguished from each other, unless by their location in space or other reference-system. Some of these are, in a broad sense, 'empirical objects', such as electrons. Their case would seem to be similar to that of certain mathematical 'objects', such as the minimum set of manifolds defining the dimensionality of an R -space. It is therefore at first sight surprising that there exists no branch of mathematics, in which a third parity-relation, besides equality and inequality, is admitted; for this would seem to furnish an appropriate model for application to such instances as these. I hope, in this work, to show that such a mathematics in feasible, and could have useful applications if only in a limited field. The concept of what I here call 'indistinguishability' is not unknown in logic, albeit much neglected. It is mentioned, for example, by F. P. Ramsey [1] who criticizes Whitehead and Russell [2] for defining 'identity' in such a way as to make indistinguishables identical. But, so far as I can discover, no one has made any systematic attempt to open up the territory which lies behind these ideas. What we find, on doing so, is a body of mathematics, offering only a limited prospect of practical usefulness, but which on the theoretical side presents a strong challenge to conventional ideas.