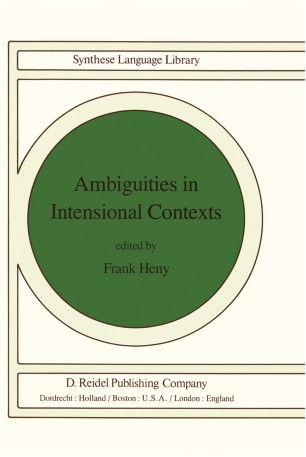 The essays in this book deal with a number of problems in the analysis of intensional language - more especially with the analysis of the personal modalities in natural language. Together they cover a representative spectrum of the problems of contemporary ,interest in this area, in a way that should make them of interest to linguists, logicians and philosophers concerned with natural language. The contributors are mostly more linguists than logicians or philosophers but some are more logicians or philosophers than linguists. As far as possible, we have tried to conduct the discussion in terms that will enable students from any of these fields to come to grips with the central issues. This volume will provide, I think, material for a very stimulating course. I have used it as the basis for a course at the introductory level in the philosophy of language. The essays in the book led us back to look at the classic texts­ and a good deal of the intervening literature crept in of its own accord. Out of that experience grew the introduction that follows. In contrast with the rest of the book, the introduction is frankly pedagogical. I hope and believe that many who would otherwise find the papers themselves hard to digest will ~e helped on their way by that summary.