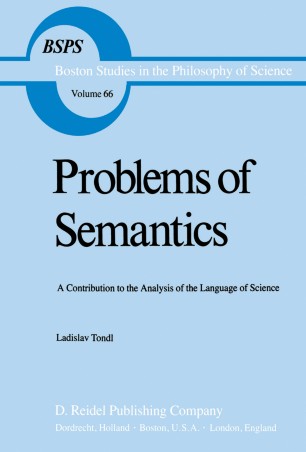 A Contribution to the Analysis of the Language Science

Part of the Boston Studies in the Philosophy of Science book series (BSPS, volume 66)

Ladislav Tondl's insightful investigations into the language of the sciences bear directly upon some decisive points of confrontation in modern philos­ ophy of science and of language itself. In the decade since his Scientific Procedures was published in English (Boston Studies 11), Dr Tondl has enlarged his original monograph of 1966 on the promise, problems and achievements of modern semantics: the main topic of his later work has been semantic information theory. A Russian translation, considerably expanded as a second edition, was published in 1975 (Moscow, Progress Publishers) with an appreciative critical commentary, in the form of a conclusion, by Professor Avenir I. Uemov of Odessa. Indeed many Soviet studies in the problems of the semantics of science show the same sort of philosophical curiosity about the relationship of meanings in scientific language to pro­ cedures in scientific epistemology that characterizes Tondl's work, as in the work of Mirislav Popovich (Kiev) and Vadirn Sadovsky (Moscow) and their colleagues. But we know that interest in these matters is world-wide, ranging from such classical topics as sense and denotation, empiricist reduction, vagueness and denotational opacity, to the new and equally exciting topics of the semantics of non-unique preference choices, the nuances of informational synonymity, and the semantics of a picture shape (so briefly but beautifully sketched in Tondl's dense and promising last chapter). We are pleased to have had Tondl's kind cooperation in producing this English edition, actually a third edition, of his research about semantics.