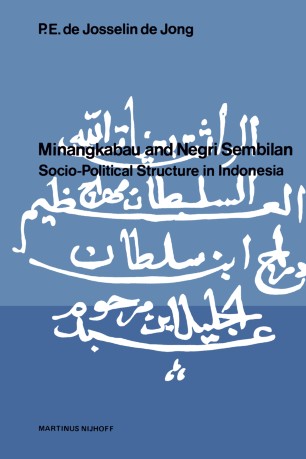 As soon as one has to decide on a system of transliteration for the languages spoken in Minangkabau and Negri Sembilan, one is faced by peculiar difficulties. In the first place, one has the choice between adopting the Dutch system, the Indonesian (which is derived from it), the British or a scientifically satisfactory one. Then, should one spell the Minangkabau words according to their pronunciation, or in their Malaicised form, as the Minangkahau themselves do, ,at least when writing in Arabic characters? Further there is the difficulty that we do not really know what the language of Negri Sembilan is like ; from the scattered data one gets the impression that it should rather be considered a form of Minangkabau than a form of Malay, but European writers on this State have diligently "corrected" the native words and expressions, giving them, as much as possible, a Malay appearance. After some hesitation we adopted the following principles of trans­ literation : A. We shall spell the Minangkabau words in accordance with their pronunciation, as is customary when Minangkabau texts are published in their Romanised form. B. Negri Sembilan words will be given in their Malay form, al­ though there is reason to suppose that in the actual spoken language these words may differ quite considerably from the way they have been rendered here. C. For both the Sumatran and the Peninsular words we shall follow the official spelling of the Indonesian Republic.