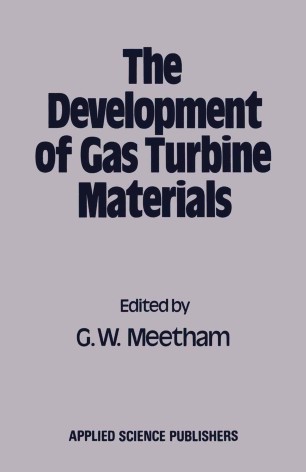 The Development of Gas Turbine Materials

The turbine has many advantages over other prime movers for producing power. The first turbine used water as the working fluid and this principle is still used in hydro-electric power generation. The steam turbine was developed late in the nineteenth century and was first applied to marine propulsion by Parsons in 1897. Since that time it has become the most widely used prime mover in electricity generation and marine propulsion. The equipment required to generate steam is bulky however and it was realised that much more compact power plant could be designed if the hot gases used for steam generation could drive the turbine directly. Early attempts to produce gas turbines were unsuccessful for several reasons, one major problem being that materials with the capability of operating at sufficiently high stresses and temperatures were not available. Following the first experimental Whittle engine in 1937, the emphasis on the development of the gas turbine engine for aircraft propulsion during World War II changed this situation dramatically. Gas turbine powered civil aircraft entered airline service in the early 1950s and gas turbines also began to compete successfully in other fields. Apart from the aircraft market, they have been used widely in pumping sets for oil and gas transmission pipelines and peak load electricity generation. Use in warship propulsion is increasing and there is currently major activity, in the USA in particular, in developments for vehicular propulsion.